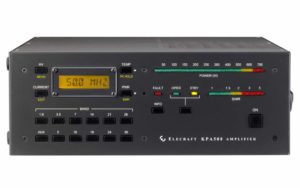 Having just purchased a KPA500 amplifier by Elecraft, I thought it might be a good idea to characterize a few important things about the amp.  One being the input vs. output power levels.  I had occasion to send the amp to Elecraft for testing, and updating.  The amp has been recently returned, as up to specs by Elecraft.

The amp was fed into a KAT500 tuner, and an actual antenna was tuned and used for all tests, save 30 Meters.  A dummy load was used for all 30 Meter testing.

The power on each band was increased in small steps while the output power was entered into a spreadsheet.  I used the spreadsheet to graph the amp in/out ratios.  Below you will find the input vs. output graphs for my KPA500.  This dataset is not designed to show the 1 db compression points, just a general feel for how the amp should behave.

All three graphs were generated from the same dataset, they are presented in different ways to facilitate viewing.  Click the graph you like, and it will expand to full screen. 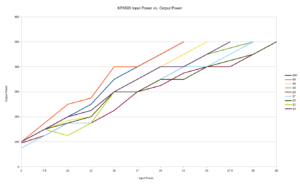 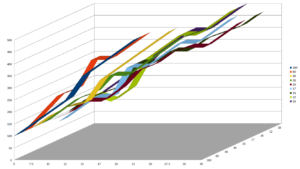 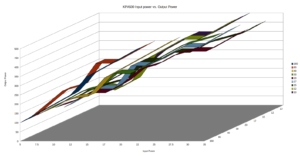