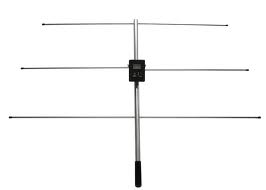 I have been tracking down RFI issues for the past year.  I have also recently rebuilt the shack, and that removed a lot of little RFI sources.  About four months ago I decided to get serious about this, as winter is coming, and in the Pacific Northwest, this means rain for the next six months…  Not wanting to wander about in the rain I decided to purchase a few items to assist in hunting down RFI.  One was an Ultrasonic Spark detector, and the other was the MFJ-856 Directional Noise Finder W/3 El. beam.  What the MFJ-856  device is, is a wide band receiver in the 135 MHz. range, tied to a three element Yagi which has a handle on the end.  It makes for a pretty nice hand held unit for sniffing out RFI.

Overall it was useful to me in locating  sources of RFI, I would point it in the general direction of a noise source and wave it around until I got a peak in the meter.  Once I had that, I would walk towards the source, waving the antenna around, following the peaks.

The device is reasonably well constructed, MFJ quality control seems to be good, as the unit I got has no defects in it.  It came boxed nicely, all parts were included, the instructions were clear, and it was simple to construct.   There were however a few items to note:

The screws which connect to the Yagi as the feedline were loose in the receiver box, I suspect they came loose in shipping.  This was easy to fix.

The mounting of the receiver box could be better; but it seems to work and it does reduce the length of the feed line to about two inches.  The receiver is held in place by two strips of metal which also serve as the feed-line for the three element yagi.  It is a bit flimsy, but for $150 bucks, it is fine and I really should not carp too much about it, it has not fallen off or caused any issues at all…

The elements of the antenna are held in by screw tension, so they stay tight most of the time, this also makes for fast disassembly.  Initial assembly was simple as the elements were color coded so placing them was simple.  Every so often you have to re-tighten them by hand, this takes about ten seconds.  All in all the construction is acceptable for a $150.00 device, it holds together, and seems to work well for it’s intended purpose.

This antenna is designed for RFI location, and as such has some very specific ways it should be used.  If you are in an environment of distributed RFI, (i.e. RFI being carried from a few miles away, and being transported into your area via the utility lines, not direct radiation),  you have to know how to use it to get the direction you should go to find the distant source.  Get between poles, point it one way, take a reading, then point it the other way, take a reading, and walk towards the strongest reading, and do it again, and again, and again.  You can also get in your mobile rig, and just drive along the power lines in the direction of stronger signals.  If you do not have a mobile rig, then the MFJ-856 is the tool for you.  Once you get closer to the source, it gets simpler to locate the source, as you will start to get it by direct radiation.  You just point at it and walk towards it until the receiver swamps.  Once that happens you are done…  An attenuator would be really handy on this device, and for the life of me, I can not imagine why it was not included by MFJ.

Was this device useful…  Yes, but one must get to know it and how to use it first.  It should have an attenuator, once you get close, the antenna becomes useless in the new configuration!  That would help make up for the single frequency issues mentioned in the “Cons” section.  The lack of an attenuator really reduces the usefulness of this device, where it will shine most, in an high level RFI environment.

Did it help me locate RFI sources…  Yes, it was very handy in finding point type sources at a distance.  It was so-so in helping me locate the actual location of the sources when they were being carried via the utility lines.  All it does is show that the power lines are involved in RFI transport.  Once I got close to a source, the 856 works like a champ, as long as the signal is not too strong.  It will pick out a pole, or house,  as a source in a flash if you are far enough away from it, again, the receiver gets swamped at close range and under high level RFI, and the lack of an attenuator.  This is really the weak spot for this antenna.

Would I buy it again… Yes, it was very useful, and without it my RFI hunting would have taken a lot longer.  RFI itself is difficult to locate, so please do not blame this device for some of the listed issues.  It really is the nature of the RFI location beast to make things hard to find…  Would I pay more for one of these with an attenuator?  Yes!  The lack of an attenuator is a definite black mark for this unit, I would even pay more for it.  In fact I have purchased an attenuator for it, and will review that later…

I have had to remark the color codes as they have faded over time.

N1BUG has a rather nice modification to this device at: