Phased arrays for 40 and 30 Meters 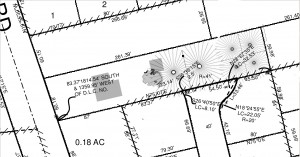 If  you look at this site, you will see that I have been fighting an RFI problem for years…  For the most part I have it beaten down, and it seems to not be coming back…  So…  That said, I decided to construct a four square array for 40 meters, and a two element 30 Meter phased array, so I could null the remaining RFI, and gain some signal too boot.  This also gives me a decent 30 meter Antenna array as well…  A four square system is not a small project, you need four verticals, miles of ground wire, a phasing unit, and some land, couple that with a two element 30 Meter phased array and you end up needing something like two miles of ground wire, and five antenna…  For the past few decades I have been threatening a 40 Meter phased array, maybe two elements, maybe parasitic, or maybe driven, I never really committed.

I had a failed tower project, and found myself with a slight surplus of money after I sold everything dealing with the tower…  The cash I was going to use for the tower, could be redirected to the four square project.  So I decided to build a phased array for forty and 30 Meters!  As I see it the pros/cons as as follows:

The first thing I did was to inventory the site to insure I had room for the array, and the ground system, which is significant   I wanted to be sure I had the space for a four square…  I briefly thought about one for 75 Meters, then decided the lot was not large enough…  As you can see from the photo, the lot is long and skinny…  It is 60 feet wide, and 300 feet long, a bit slim for a full four square on 40, so I will use compromised radials.  The lot would better lend itself to a linear array, but I want a 4 square so I can point the null at my RFI sources, of which I have a few.  If I used a linear array, I would have very limited control of the null.  Thus the decision on a four square.

The first thing was to get a scaled drawing of the lot and the array with Ground radials…  That told me instantly that a Four Square on 40 Meters was out of the question for my lot…  Click any photo for a larger view.

As you can see, even though it would fit, the compromises would be too much for 40 Meters…  The radials in the North/South direction would be compromised, to say nothing about being up againset a chain link fence on the south side, and an eight foot metal fence my neighbor to the North put up…  So…  Change of plans! 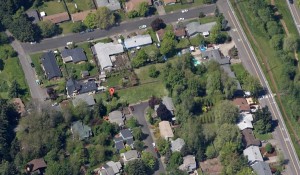 I am considering the Comtek 40VA 40 Meter vertical antenna, from DX Engineering,  for the elements of the two element 40 Meter array.  I have purchased one, and the construction is superb.  However I will more than likely go with a Gap Challenger DX for the 40 meter elements as I have two of them now.  This got me to thinking about the radial field…  If I can correctly phase the two Gaps, then I can avoid the massive radial field needed.  If this is true, then I will buy Mono Band Gap Verticals for the 30 meter array. 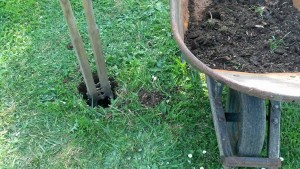 I decided to construct the array one antenna at a time, making that antenna as perfect as possible, then moving on to the second element.  I also decided to set it up as a fixed direction initially for testing.  The idea would be to take careful readings prior to adding the second element, then add it and retake the S Meter readings over time.  That way I could get a rough idea if the beam was working, and what the F/B ratio would be.  This would help me with the RFI issues, and it would help in reduction of QRN in general…  Overall a three db increase in signal won’t harm things either…  I am looking forward to testing this array.  I have arranged to test with several hams in the area, some in the near field, and some several miles away.  I want to get a true reading on the F/B, F/s ratios in both near and far fields. 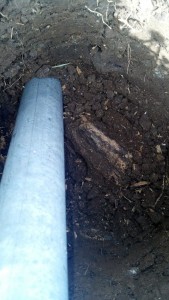 The first thing that happened was I hit a tree root…  Three days later, I was still working on that same root.  I decided to bring in a professional equipment for the job.  I called a Fence contractor, they dig lots of holes for a living, and they put poles in them as well…  Sounds good!  After I got a bid for the job of installing seven posts I decided to do a lot of it myself…  They fence contractor charged me $20.00 bucks per hole.  That included back-filling with Sand/Gravel.  As I was tired of using the post hole digger above, I elected to have them drill the holes for all posts needed…

In comes the heavy equipment…  This took no time in digging all seven holes…  In fact, it took under an hour to do all the holes, the fellow running this device was a pro.  He would drill a hole, then use a post hole digger to clean it up.  One of the funny things I noticed…  Every tool with a handle had the handle removed and replaced with a galvanized fence pole…  The owner must have broken a few of the handles at one time…

As can be seen, this is one of the holes for the front right 30 meter antenna, as viewed from the house looking East.  We finished the holes on a Friday morning, and I decided that it was time to do the concrete work…  I took out my calculator and did the math for how much concrete I would need… It worked out to .9 bags per hole!  Great, Seven holes, seven bags…  I ordered the concrete, and a Mixer.  The Mixer cost something like 20 bucks a day…  Well worth not doing a hand mix in a wheel-barrel.  I also wanted the mix to be decent, not something I was moving around with a shovel.  The mixer, and concrete arrived and the fun began.  Myself and one other ham, and one friend began work on this…  One thing…  If you mix concrete, follow the instructions, no matter what you think, no matter what anyone tells you.  The concrete maker knows what it takes to get a good mix…  All three of us looked at the instructions and said, WTF?  One gallon of water for 90 pounds of mix?  You have to be kidding!  We followed the instructions, expecting things to go bad…  They did not, the concrete looked perfect, every time…  We mixed one bag with one gallon of water, and pored after five minutes of mixing.  Every pour was perfect.  The amount was right, and the mix was right…  I mounded each pour up on the pole to drain off water from the pole. 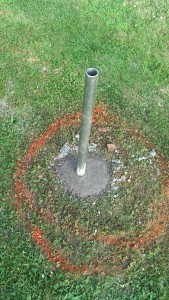 After four hours we were finished…  All in all the creation of the infrastructure was not that difficult.  it took seven bags exactly of concrete to finish this part of the project.  Each pole has a raised mound of concrete at the ground/pole interface to keep water from pooling on the pole.  Each pole is 1/4 inch galvanized pipe, and each pole will have a cap on top to keep rain from entering the pipe.  What rain/condensate does get in, will drain out the bottom into the sand/gravel.  This will also serve to keep the cut end of the pipe out of a water pool underground.  The top caps have not been placed yet, as the concrete is still fragile.  I will wait a few more days to place them.  Once in place, they should protect the poles from filling with water when it rains.  In Oregon it rains most of the winter…  By that, I mean it actually rains 90% of the time.  While we don’t get huge amounts of rain, we get a stedy drizzle for months at a time.    This tends to fill things like poles up fast.  So…  The idea of a fence cap.  It also makes the array look a bit more professional as well…  The detail of the hole itself is presented here on the left.  Sorry for the quality of the drawing, I did not major in engineering drawings… 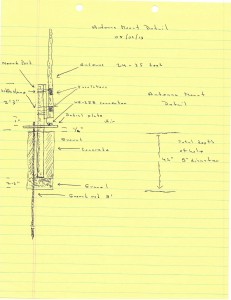 Note total depth of hole should read 24, not 42 inches.

Here is the final photo prior to a bit of trenching. if you look at the photo carefully, you can still see the post levels on three of the posts.  I will next trench for the feedlines, and control cables.  I probably should place them on top of the radial field so I can get to them, but I have decided to put them low, as opposed to high.  My thinking is that having the control cables beneath the radial field, will reduce the chance of picking up RF and moving it into the shack.  I will of course clean the RF off the cables prior to moving into the shack anyway…  This concludes Part I: The Beginning.  Next will be the construction/tuning of the first 40 meter vertical…

Note: There will be no part II, using these antenna.  I have come to the conclusion that phasing a set of GAP Challengers is too difficult a project.  Even defining where the feedline is located is difficult and took a call to the maker.  I will be switching to feeding a pair of mono-bands Gaps on 30 meters.  Antenna “A” should arrive next Friday.  I will get it working prior to winter setting in, and i possible across winter, but more than likely next summer.

Note: After about a year of testing, the 30 Meter Mono GAP is working so well, I will be moving forward with the 4-Square array.  Antenna 2 will be purchased later this year, and installed across winter/spring 2016.