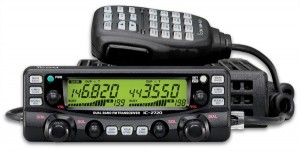 This review of the Icom 2720H VHF/UHF mobile transceiver is not going to be a highly technical review, it will be a review on use of the radio, I am a fan of Icom rigs, so there is also a bit of bias in this review…  I have owned and used two Icom 2720H’s for several years now, one in each vehicle ..  It is a good rig, but it does have it’s faults…  One of them being the programming.  If you have a computer, all is well, but if you are on the road, and need to change anything, (anything at all), get out your Nifty Mini-Manual for it…  You will need it.

The rig also has some intermod problems as well…  Well, lets be honest, I live in a smaller town, around 150K people, and I get intermod here…  The radio is VERY sensitive to anything else in the immediate area as far as intermod is concerned.  It also suffers from desense as well…  This may not make the 2720H sound like a good radio, but it is…  Sort of…  You have to get used to the issues above to enjoy it.  The rig for all of it’s faults, puts out a respectable amount of power, (oh yes rumor has it there is a final issue with early serial numbered rigs as well), and once programmed is really easy to use, and has two complete receivers in the chassis.  The rig will put out 50 Watts, which is pretty good in today’s world.  It also has a removable control head, so it mounts up well…

What Icom says about it:

What I have to say about it:

When Icom says wideband, they mean wideband, the rig covers the 118-550 MHz., and 810-999 MHz., cell restricted of course.  I am a MARS member, so I also wanted a rig that could be modified for extended transmit simply, this rig can.

If you look at the face-plate above, you will see that both left and right sides look like mirror images of each other, that is because they are!  Two Squelch controls, two Tune controls, etc.  It is surprisingly easy to operate given the pain in the rear it is to program.  Once you learn how to change frequency, adjust the volume control, and touch up the squelch, you pretty much know how to operate the rig.  This all assume you have pre-programmed it…

Once turned on, you select which receiver you want to work with by pressing a button in the upper left corner of the rig called “Band”, (took me a bit to realize this really means “Radio, or which side you want to mess with), you then turn the “Channel” control, selecting the pre-programmed channel and offset, adjust the squelch, perhaps select an output power, and you are finished.  If you want to set a second frequency to listen to, you press the “Band” button on the otehr side, and do exactly the same thing to the right side of the radio.  Once finished, you are able to monitor two frequencies at once, (or maybe have one side scanning, and the other side of the radio set to your favorite repeater), and transmit on either by pressing a single button to select which side transmits…

If you are not near something which causes intermod, (like another transmitter), the rig is fine, if you are near anything which can cause intermod, it will cause intermod, and your monitoring is over…  This becomes particularity annoying when you are scanning a range of frequencies, or pre-programmed channels.  The scan stops on the intermod, and you either have to tell it to move on, or wait for it to end…  There is an add on from Par Electronics which a friend who purchased one say works well in reducing or removing the intermod.  Having not used one, I can not speak to how effective they are, someday soon I will be purchasing one for the rig and adding a review of it here.  I took the rig on a trip from Oregon to Arizona, most of the time it was fine, but when I got into any large city, like San Francisco, Las Vegas, Phoenix, etc. the radio became almost useless a great deal of the time.  While running across the deserts of Nevada, and Arizona the extra power the rig has, (50 watts), comes in very handy.  When in smaller towns the intermod was not an issue.

Would I purchase this radio again?  Maybe…  If you look at the Pros vs the Cons’s above you can see why I am torn…  I have two of them now because I want to avoid having to learn two different radios…  I want to have the channels in one radio be EXACTLY the same as the other radio.  By having two of the same type of rig I get that.  I also only have to purchase the software one time.  If someone were to offer to buy both for a reasonable price they would be gone in a moment, and replaced with something else with fewer issues.  Do I like the radio, strangely enough yes…  I think it is because I only have to program it very seldom, so the day to day use is fine…  From my viewpoint the intermod is a killer for this radio though…  Had I known it has intermod problems like it does, I would not have purchased it.

good morning i have a problem
with my
Icom: 2720H Radio
i cant use it as a relay for only vhf only
coz my 5 icom 85 are only vhf
do you have an idea how to fix it