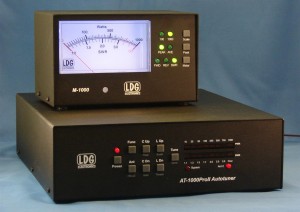 The price set me back a bit, ($539.00 at HRO), but, based on my previous experience with LDG’s quality, and customer service I went ahead and purchased the LDG AT-1000 PRO II Autotuner, I have not been unhappy with that decision at all.

The size of the boxes is very close, with the AT-1000 PRO II being the larger of the two…  This caused me a bit of pain as my setup is VERY tight…  The PRO II is about 1/4 inch wider…  It almost did not fit.  I had to remove the carry handle from my Icom IC-756 PRO 3 to get it to fit, and it was tight…  I do miss the meter, and the thought of paying $130.00 for an external meter makes me take a deep breath and say…  It’s OK…  I have not bought the meter yet…  I hope the meter takes power from the Icom like the tuner does…  See the review for more on this…  I will add to this review on the meter if I decide to shell out another $130.00…

The main difference between the PRO II and the stock Autotuner, are as follows:

I miss the analog meter!  While the LED meter is faster, and reads easier, I miss the meters moving…

The LED meter is fine, it is much faster than the older meter version used to be, but I want my meter back…  Yes, I can buy a larger meter for $130.00, but I liked the smaller meter, and I dislike the $130.00 price for a meter.  I may get the external meter, when I can afford it, then review it here…

The AT-1000 PRO II Autotuner is just a hair wider than the original AT-1000 autotuner.  This cause me some problems in mounting…  If you look at the station photos here, you will see the original AT-1000 sitting just behind the mouse pad.  Note how tight the equipment is in that configuration.  Adding the LDG AT-1000 PRO II Autotuner was not easy…  I had to remove the carry handle from the Icom 756 PRO III, in order to regain teh additional space.  The fit is still tight…

This was a nice surprise…  I now have more room to hang cables, and grounds.

Nice addition…  It may have been on the original AT-1000, but I never knew it, so it is new to me!  After a few months of using the bypass switch it is very handy…

This will be nice…  I am adding a Dummy Load, and this is where I will put it.  I have an antenna switch beyond the tuner, but it is a remote one, and putting a dummy load outside is not in teh mix, nor do I want to use one port on my remote switch.  I will use the port on the tuner, and save my remote port.

This is where the device shines…  Once I did the initial tuning, which consisted of going to every operating frequency I used, and hitting tune, the tune time is almost instant.  I press tune on the rig, and the antenna is tuned…  If I hit a frequency I did not preset, then after the initial tune, it is instant…  The initial tune still takes longer, and makes a lot of noise, but it is a one time thing, so it is not an issue for me.

I can only speak to the Icom rigs, because that is all I own…  The tuner becomes an extension of the Icom IC-756 PRO III.   It takes power from the Icom tuner port, and when I press TUNE on thE Icom, the tuner kicks in and does its thing…  It is really like the tuner is an extension of the radio.  The only difference is that my AL-82 feeds the tuner, so I get a standard input to the amplifier.  I keep my drive below 70 watts, so I have never ran more than 1200 through the tuner…  It seems to handle it fine, and I run digital, with very close to 100% duty cycle.  I do de-rate the AL-82 output for digital though…

Integration with an Elecraft K3:

I recently sold my 756 PRO III, and purchased an Elecraft K3.  There is no integration to the Elecraft at all!  Or at least none that I have seen so far.  It would be nice!  I manually tune the LDG, at low power then up the power for QSOs.  I hope someone comes up with a cable for this…

I installed the tuner between the antenna and the AL-82 amplifier.  I also installed an SWR bridge between the tuner and the antenna.  This allows me to see what the tuner sees, and what the tuner provides the AL-82.  One of my fears is that something will go wrong outside, and the tuner will mask the problem, by tuning out whatever happened…  So I monitor both the input side of the tuner, and the output side of the tuner.  I used RG-8 cable, not RG-58 cables, and I have a stout ground on it.  The shack has a copper bus for grounding that is used, so the tuner goes there.  The ground lug on the back of the LDG AT-1000 PRO II autotuner is nice to have.

I just hit tune…  Really simple…  It makes some noise and I am done.

What LDG has to say:

Building on the success of the AT-1000Pro, LDG Electronics has refined and expanded its flagship 1KW tuner. The new AT-1000ProII keeps many of the same features of the previous model, but simplifies the operation. With the two position antenna switch there are 2,000 memories that store tuning parameters for almost instantaneous memory recall whenever you transmit on or near a frequency you’ve used before. Just key and it tunes! The AT-1000ProII will operate at any power level between 5 and 1,000 watts peak RF input.

The AT-1000ProII has a large, easy to read bargraph with two selectable scale ranges (100 and 1,000 watts) as well as SWR meter. The optional M-1000 4.5″ analog meter shows FWD (100 and 1000W scales), REV, or SWR in Peak or Average. The AT-1000ProII will interface with many popular transceivers, enabling their TUNE button to control the AT-1000ProII’s operation. Dedicated control buttons allow you to fine-tune capacitance and inductance on those rare occasions when the AT-1000ProII can’t find a perfect match by itself.

The AT-1000ProII will tune from 1.8 to 54.0 MHz continuously, and will match an amazing range of antennas, from Yagis and dipoles to inverted-Vs and slopers; virtually any coax-fed antenna from 6 to 1000 ohms impedance (16 – 150 ohms on 6 meters). Tuning time is usually under 10 seconds. If you’re transmitting near a frequency with stored tuning parameters, it will set those parameters in under 0.2 seconds. Longwires or antennas fed with ladder line require an external balun.

I would buy it again!  I would recommend it to a friend!  I would buy one used!  All in all I am very happy with this device, and would happy recommend one to anyone.  I in fact have been so happy with LDG’s devices, that I bought an IT-100 tuner for my 706 MK II G.  A review on that tuner will follow in a few months…  It is solidly built!

I thought I would add a note about LDG customer service.  I have seen very few companies which provide the level of customer service LDG does.  I had an issue with my AT-1000ProII tuner, and LDG took care of the issue almost instantly.  I can’t say enough about the customer service these folks provide.

I bought the meter a few months ago, and it is good to have a meter again…

Also I changed both the rig and the amp to an Elecraft K3, and an auto bandswitching ALS-1306, see review here.  This caused a bit of a pain relative to auto tuning, until I figured out how best to handle things…  The K3 has the ability to control the output power for tuning…  I also have an ALS-1306 amp.  If I set the K3 to three watts out, the ALS-1306 puts out about fifty watts…  That will trigger the autotuner to autotune.  So…  All I do now is to tap the tune button on the K3, that feeds three watts to the amp, which in turn feeds 50 watts to the tuner, which in turn forces it to autotune.  This gives me 5 second band changes…  Once the tuner has been to a frequency it takes about one or two seconds for it to re-tune there…

This site uses Akismet to reduce spam. Learn how your comment data is processed.