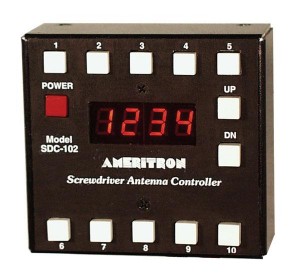 This review of Ameritron’s SDC-102 Screwdriver Controller was written as a result of perhaps 5 months of use of a new Ameritron SDC-102, in a  2004 Tahoe four wheel drive sports utility vehicle.  The Tarheel 100HP antenna is mounted on the stock Tarheel antenna mount, which in turn is mounted to a Tarheel trailer hitch mount, which lives on the rear of the Tahoe in the trailer hitch receiver   I am working on a quick weatherproof disconnect for that setup.  When finished I’ll add it to the review section, or start a new section on homebrew stuff…

I did not want to use a switch which raised and lowered my antenna with no feedback, of any kind– I wanted some repeatability, and to me, repeatability means numbers used for calibration, not just listening to the background noise and peaking it.  Although that actually works pretty well, the thought of having to re-tune for each band change, (perhaps while driving), to some unknown position of the antenna seemed at best:

I have never even used the single switch controller switch, other than to test things out, I went directly to the SDC-102.  The SDC-102 is a well constructed metal box, with a mess of cables coming out the bottom of it.  It is light weight, and somewhat thin so it mounts up pretty well…  See the specs later on in the review for more detail on that.  It is easy to read, and I can attest to the fact that it did not run my battery down when left on overnight…  The photo on the left does not do justice to the brightness of the display, it is a lot brighter than the photo shows.

What Ameritron has to say about the SDC-102:

The SDC-102 lets you save 10 screwdriver antenna positions in memory. With a push of a button, you can quickly return to any saved position.

The antenna always moves to its desired position from the bottom, insuring that the motor is always loaded the same.

Ameritron’s AutoPark™ feature automatically bottoms your antenna for parking in your garage and resets and calibrates your counter each time to eliminate antenna slippage and turns count errors.

Motor current can be monitored for signs of trouble and to determine stall current.

Motor direction can be reversed so the UP button is always up. Compatible with single/ dual magnetic sensors. 3 ½” x 3 ¼” x 1 ¼”.

Ameritron appears to be correct in what they say!  They can give things fancy names all day, the real proof is in the operation of the device, and this device works as described!  I can’t ask for a better product…  Well, yes I could, but no one would listen…  It would be nice to have the following changes to the SDC-102:

All but for the first item would make it a different product, and it probably cost a lot more money.  So back to talking about the SDC-102, not something I want…  The SD-102 is solid, all of Ameritron’s products are built like little tanks.  If I were to drop the SDC-102, I suspect the case would take a small dent, get dirty, maybe even scratch the paint up a bit, but it would still work.  It is not loose in any way, nor does it rattle when you shake hell out of it.  I have had it in place for five months in the Tahoe, and if you know the roads where I live, you know it gets shaken…

Does it repeat the antenna setup?  In a word, yes, every time, exactly, no re-tune needed…  I am used to things working sort of close to how they are described in sales literature ..  Now days you buy something and it works for the most part as described, not quit as well as described, but close…  I am getting tired of that…

The SDC-102 works EXACTLY as described…  Ameritron has added back something that is starting to disappear– honesty in product description!  It is refreshing!  This device works EXACTLY like they say, to the letter.  It never misses a tune, it never fails, and it always seems to work.  I expected to have to hit a button and be put close to the tune point I had preset then play with it to tune up the antenna…  Nope…  I am put right on the tune point I selected during setup…  Makes tuning while driving nice…  No fiddling around to get the lowest SWR.  Press the button, wait several seconds, and you are tuned…  No fuss!

The box is smart…  I am sure there is a microprocessor in there someplace, which changes some of the install process…  More on that later, back to user setup.  User set up is easy…  You tune the antenna manually using the UP./DOWN buttons provided, press and hold the preset you want for that tune position, wait a moment, and you are done.  The next time you hit that preset the antenna goes there…  it really is that simple…  I was shocked at how the noise peaks when the antenna is tuned, and how close it is to tune when the noise peaks…  In reality I could do this without the SDC-102, but I would always be just a touch off in tune…  Getting the repeatability of the SDC-102, removes that error.  The thought of transmitting at any power level, and dragging the coil contacts across the coil bothers me…  Too many years of using roller inductors, and seeing the pits that sort of thing causes…  I want my antenna to stay working for years, so I will not transmit and tune at the same time…  This let out tuning while driving without the SDC-102.  Back to the user interface…  All in all it is as easy to use, if not easier than Ameritron describes.  One cool feature…  If you hold down the UP and the DOWN buttons at the same time, the antenna will home to the lowest position, and reset the turns counters.  I have had to do this one or twice in five months to reset them, but on the whole the SDC-102 does not lose turns count.

Installation was not that hard.  Running the wires in the car was the hardest.  Once run, the unit goes in easy, and works well…  Not much to say about that.  You will have to check some internal programming to be sure your antenna is correctly set up, but that is covered in the manual.  If you need help, the manual has a phone number you can call for assistance.

The unit has a number of features, which assist in not burning out the motor, and in getting the antenna set back where it belongs for tuning…

Buy some mix31 ferrite beads from DX Engineering when you get this device…  Mobiles spray RF everywhere, no matter how many grounds you add, this device is sensitive to RF on the power/control lines…  You WILL need some ferrite beads…

Wish I had more to say about operation…  You just hit the preset, and the antenna goes there…  Really simple, and so far it has failed to home to a preset once or twice…  Not bad in almost daily operation for five months.  A simple Auto-Park reset fixed this, all done while driving.  One reason I bought this unit, as opposed to the switch, was I did not want to be looking at the rig, and antenna while driving…  I wanted to take my time, set it yup correctly one time, then just press a button to get back to a preset.  Having ten presets, numbered 1-10 is OK, but it would have been a lot nicer if the bands were labeled on  few of them…  I have to count up to the band by moving my finger across the buttons, and saying to my self, 80, 40, 20, 15, 10, etc…  Just numbers is OK, I guess, but having little stick on papers, which would stick on to the button tops with band numbers on them would be a lot nicer…  I may make some…  Probably need to be plastic…  Or better yet, a label maker…  Back to operation…  Just press the button, and you are done…  That simple.  The LED’s used in this device are bright…  When Ameritron says easy to read in daylight, they are telling the truth, the photo they have does not do justice to the brightness of the display.  The numbers are large too, this makes for an easy read…  But…  To tell the truth, I don’t need to read it, I just press the button, and wait for it to stop.

I would buy again, for the price it is well worth it…  I say this knowing that Hams are the cheapest people around too! Would I recommend it to a friend; yup!  It really is a clever device  it works well, and as I said for the price it is a very good deal…  If you get one, please feel free to put your comments below, good or bad…