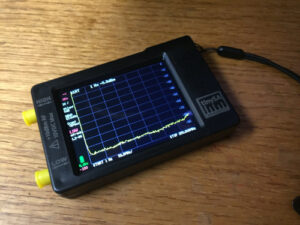 Having just purchased a tinySA, I went through the upgrade, and tools location process one does with every new piece of hardware.  I thought it might be a good idea to document the steps I used to process this item into my lab, so I thoughts I’d make a few notes on setting up the tinySA for the next person…  This is not a review, it is a few notes I might need later on to reinstall it from scratch, and  I thought I might share them with you!

I have always wanted a spectrum analyzer, I have looked at the multi thousand dollar ones for decades.  Not having several thousand bucks in throw away, I bought a used ATTA spectrum analyzed for $65.00 several years ago.  It does the job, not as well as a good HP, but it does OK for my needs.

This blog entry is a string of notes that may help the next person along this route to get to a working, fully updated, with all the tools.  If one could take this device back in time, to say 1940, you would probably be burned at the stake as a witch for just owning it, that is how cool this little device is…

Bring in the Clones:

Knowing that there are a lot of clones of these small devices out there, I wanted to get a real one, not a clone.  This helps by supporting the folks that brought you the device, and the vendors that take a bit of a profit loss to bring you a non cloned device.  By making sure I purchase a real device, and not a clone, I support the author, and in general do the right thing…  I purchased one from R&L Electronics.  It seems I purchase a lot of things from R&L lately, they seem to be a decent vendor.  I selected a US vendor, in the event I got sent a clone, I could then return it and complain, and hopefully get a refund.

I received what I believe is a genuine tinySA from R&L.  How do I know it is not a clone, I spent some time to insure I could tell.  One of the ways is to watch this video on YouTube dealing with clone issue.  Another is to get on the tinySA group at groups.io.  Yet one more way, and by far the best way to educate yourself regarding cloned devices is to visit the tinySA ID a clone page.  Please do buy from reputable vendors, and try and stay away from the cloned devices. 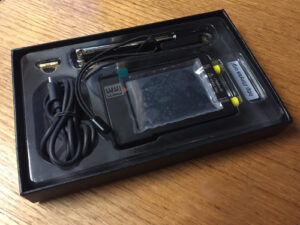 The tinySA arrived, well packed, and ready for operation.  The US postal service had attempted to destroy the tinySA, but failed miserably!  I opened the box to find the items shown to the left in the photo.  I have to admit, this is not the initial setup of the box, I repacked everything so they each looked like they had when they arrived.  My first thought upon opening the box was; what is missing from the empty spot on the right?  It turns out nothing is missing, that is just an empty spot, mine had a sticker with the URL for the tinySA site, stuck to the plastic.

The next thing I noticed was the box it comes in, it looks exactly like the boxes used for the VNAs that are so prevalent now days.  Upon opened the box, I saw a well packed, box with the tinySA in it, and a pair of gold plated SMA jumpers, a small SMA antenna, a lanyard, a guitar pick, and finally USB-D cable wrapped so tightly I knew I would never get it back in place correctly– I was right about that one…

The USB-D is used for charging, and connection to a computer.  The device comes with some small amount of charge initially, but I know not how much.  As much as I wanted to play with it, I resisted, and pulled the charge cable out, and plugged it into the computer and the tinySA.  A few hours later I checked, and it appeared fully charged.  See the photo at the left for a look of the device close to how it came when the box was opened.

I turned the tinySA on, and was greeted with a well laid out screen, showing far more than I expected in very tiny print.  Being old, I got out the closeup eye glasses, put them on and was rewarded by a much better looking image of the tinySA!

Once I could see it clearly, I noted it had come up working.  I instantly screwed in the antenna, and the antenna broke off in my hands…  I sent R&L a note via email, and got an answer back within a few hours, telling me that a new antenna was forthcoming.  Very much to my surprise, in just three days, the postman arrived with a well packaged bag, containing a new antenna sent from R&L.  R&L looks to be a fairly decent operation, the prices are good, and the service is superb.  Why do I say that?  I received  what looks to be a valid device, not a clone, and when a problem occurred, an instant no questions asked replacement was sent via priority mail.

I will continue to shop ar R&L Electronics, they seem to be a class outfit.  If you folks at R&L read this, thank you R&L, it was a pleasure doing business with you!  As a side note, I have no connection to either R&L, or the tinySA folks…

The first thing I normally do is to update the software on any device I get of this nature, so I joined the tinySA support list at groups.io, only to find the first thread I see is titled: “Firmware fails to load”, and it is a long thread, a really long thread…  This did not bode well…

So I looked over the thread, and downloaded the first package that said it could update the firmware.  It failed…  I downloaded the second package, it failed as well…  I was able to get a screen capture package to work, so that validated my connection status, or so I thought…

I use Linux most of the time, as I try and stay as far away from Windows as possible.  Yes– I have a Windows box.  It runs only amateur radio software, nothing else…  No mail, no web searches, the windows box exists to run three of four pieces or software…  Radio programming, hardware programming, sound card software for my Elecraft K3, and a few others…  I make a great effort to not load much onto the box, as it is after all windows, and as such– well I won’t go there…  In any case, lets just say I decided to use the Windows box for the tinySA support machine.  First things first, I joined the support group on groups.io.

I have mentioned the support group on groups.io a few times, but have not spoken about them.  What a wonderful group of people they are…  I came rushing in, with tons of questions, a failed firmware upgrade, all amid several others having the same issue…  It turns out the author of the software had made an update to the software, evidently everyone and their dog wanted, hence the large number of failed updates when I joined.

Many people offered help!  The help was thoughtful, not the help one see often now; where someone just half reads something, and fires off a quick, but not relevant answer.  The folks offering help at groups.io were all kind, thoughtful, and very helpful to me, and everyone else there…  Every single person I saw on that thread haveing a problem updating their firmware got a functioning upgrade of firmware running for their tinySA devices in very short order.

Given there was some hunting, and looking for software, needed to update the firmware, I thought I’d save some time, and document that process for later, in the event I might need to do it a second time.  Here are the steps I used.  Use at your own risk:

Once I had the tinySA upgraded, I wanted to add a screen capture application for it.  I downloaded “tinySA Getscreen”, from here.  You have to be a member of the tinySA group, at groups.io to gain access, so join the usergroup.  It is a wealth of information, and the software developer is an active member.

Next I wanted a way to use the tinySA live, so I downloaded, the tinySA App from here.  This application allows you to run the tinySA from your computer screen directly.  I will be connecting my tinySA to a permanent port on the Windows box, to allow me to bring up a Spectrum Analyzer anytime I need.  I will also connect it to my laptop and use it for my RFI location work.  Once close to a source I will take a snapshot of just how bad it is, for the FCC, should that come to pass.  See the rest of this web site for more on RFI…

I am very happy with the tinySA, my first use was to look at the signal from a neighboring amateur operator who lives a few hundred feet from me to verify his signal was clean, and it was not my K3 getting overdriven by his RF signal.  I have had a few instances where I had to drag out the service monitor, and check things out, now, I just take the tinySA.  The service monitor weighs in at 65 pounds, and is “portable” according to the manufacturer…  The tinySA weighs in at maybe a quarter of a pound.  Guess which device I want to carry around!

In fact I have a job I am doing for one of the local CERT groups, helping them with their radios, and need to look at each radio, guess what will be used in that process?  The tinySA.  I won’t have to drag around the 65 pound Service Monitor I have for that.  The tiny SA has it limits, and they are outlined in a video on YouTube, so take a look at that.  That will help you decided if you want one, and if you can use it within it’s limitations.

Well…  Now that I have a portable spectrum analyzer, I have no clue, but it will be fun finding out what else can be done…   For starters, I will be documenting my RFI in the event it goes to the FCC for remediation.  Here is an example:

Many thanks to Eric, the creator of this device, I can now document my RFI and have a decent presentation for teh FCC should it come to that…

This is a nice presentation about the tinySA. A most important point is one should make sure they do not receive a clone. The real item behaves much more consistently. I recently purchased (and returned) a clone on Amazon and after a little more research purchased one from R&L Electronics. The tinySA arrived in a few days and is exactly as you described above. I updated the firmware and now have started the learning process. Thank you for sharing your experience. Bill/W9WRP