This review of West Mountain Radio’s RIGrunner, 4008H was prompted by a total shack rebuild because I bought an Elecraft K3 and could not bring myself to just drop such a fine radio into the existing shack environment.  I decided to totally rebuild everything, from the station ground system, to both the 12 VDC, and 110 VAC, power distribution systems, before I would even think about letting the K3 on to the operating desk.  That’s where West Mountain Radio’s RIGrunner product came into the picture, West Mountain Radio sells a product called a “RIGrunner“, which is basically a 12 volt, fused, power distribution system, which uses Anderson Powerpole technology for connections.  West Mountain Radio sells several versions of this product, ranging from one with four DC outputs, to one with twelve DC outputs.  Some models have voltage indicators on them, and some models do not.  I opted for the eight output version, and for the version which is called a RIGrunner H, for horizontal version.

What this means is that the device has the Powerpole connectors pointing horizontally out of the side, as opposed to pointing up out of the device.  I was going to mount my RIGrunner 4008H on the side of a vertical desk support, and I wanted the power cables pointing downwards, and not out towards the wall behind the desk, so the H model was the model of choice for me.  As can be seen from the photo at the left, the H version did exactly what I needed.  I wanted to move the desk as close to the wall as possible. I also wanted a pigtail so I could add ferrite snap on cores for RFI suppression to each of the 12 VDC leads.  All of this just screamed downward pointing cables.  Hence the choice of the H version, so I ordered it and it arrived a few days later.

The device also has four mounting holes on ears on each side, for mounting.  The RIGrunner is solid, it is built well, and if you shake it nothing rattles!  Each output is rated at full output, so you can just add, or change, a fuse and plug your device in.  Be sure to not exceed the total device rating, which is 37 amps at 12 volts.  Enough of what I have to say about the RIGrunner, lets see what West Mountain Radio has to say about their product:

The RIGrunner product line offers the most convenient and safest way to connect all your 12 VDC equipment to a power source. RIGrunner utilizes a 13.8 VDC power panel with simple-to-use Anderson Powerpole® connectors. Standardize all of your 12 VDC connections using the amateur radio ARES & RACES, RSGB, ARRL Powerpole® system. Contact us for alternate voltage versions up to 55 VDC or for your custom RIGrunner requirements. West Mountain Radio also offers network DC power controllers in the 4005i product line.

West Mountain Radio offers RIGrunners for every station and every budget.

Here are the Specifications from the West Mountain Radio page:

Lets look at the Cons first:

I wish the H version had some of the voltage monitoring features of the non H version.  I suspect that the voltage monitoring was left out due to size constraints.  On the bright side, West Mountain Radio reduced the cost of the device by ten bucks because of this!  The H version is slightly smaller than the non H version as well.  That’s really about all, well– it could be cheaper, but as any good self respecting Amateur Radio Operator knows, Hams are the cheapest people alive today, so that is really a criticism I’d level at this device no matter what it cost.  But for $89.00 bucks it is not a bad deal.

Now lets look at the Pros:

I like using Powerpoles, I truly detest using screw terminals for power connections.  It is too easy to have a errant strand of wire get into someplace it shouldn’t be, with the inevitable smokey result.  Speaking of which, if something were to happen like that, the RIGrunner has every output fused, and the fuses are easy to change out if need be, so this gives me great peace of mind knowing this.  The fuses are also on the top, or in my case, the wall facing side of the device, so it could not have worked out better.

With four screws holding the RIGrunner in place, it is not going anyplace.  I mounted mine on a vertical rear section of the desk I keep the shack on.  It’s good that West Mountain Radio decided to make an H version!

The RIGrunner is 1.4″ H x  9″ W, and 3″ D.  This is a rather convenient size, as the 12 VDC power pole mounts spread out just far enough so you can insert a connector pair and not run into the next one.  I suspect West Mountain Radio did a lot of thinking about the layout of the RIGrunner before they started selling them.  If you mount it high, then you can let the power cables fall downwards and then run them through feed-through holes in the desk. 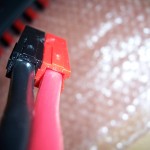 I can’t say enough for what Anderson’s Powerpoles have done for the Amateur Radio EMCOM community.  They provide a standard, which for the most part, if followed, keeps one form reverse powering a radio.  Also, if one follows that standard, you can take your radio over to a friend’s house, (assuming he/she also followed the standard), and just plug your radio into it.  It also makes for a clean and fast power make and break.  Now my IC-706 MK2G, and my K3, can be moved from the house to the car, or the trailer, and/or back again, and I have to do nothing beyond unplugging the power, moving the radio, then plugging the power back in at the new location.  It takes all of about fifteen seconds.  This lets me make the existing wiring in the trailer, and car more permanent, and thus neater.  All in all, the use of this device, actually makes one WANT to make neat installations.  Note the Powerpole connection on the left, this is how it came from the factory, a very tightly made connection.

The layout of the RIGrunner, allows one to actually make a reasonable cable layout, which lets you tie things down.  This alone is worth the time it takes to put on the Powerpoles.  The fact that it is so easy to remove and reattach a radio or other device makes this a pleasure to use.

The RIGrunner also has RFI suppression built right into the device…  I still use the ferrite’s, but it is good to see a company build in RFI suppression to any new device! 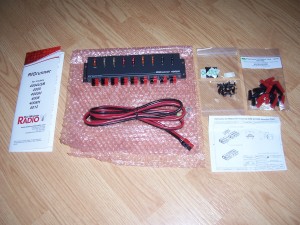 The RIGrunner series of power distribution systems is a plus for my station, and I am very glad it was here for me to use.  I have never had a cleaner 12 VDC power distribution setup on any station I have ever had.  I have added Powerpole connectors to just about everything that runs 12 VDC I own now, and made up cables for Car lighter plugs to Powerpole, battery pack to Powerpole, Powerpole to coax power jacks, etc., just about anything I can think of.  The number of additional items one can get is also nice.  The device comes with a nice supply of Powerpoles, and connectors, the little goodies that lock them together, all wrapped up in a nice box.  The packaging is good, and the manual is actually useful!  See the photo to the left for what it looks like as it is unpacked.  If I had to do it again, I would buy the same RIGrunner again, and I would do things exactly the same as I did here…  Would I recommend this device to a friend…  If you are reading this, consider it recommended!