Review of the iMate by BetterRF 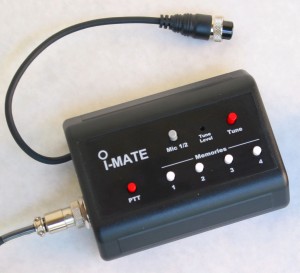 This review of the iMate by BetterRF was prompted by my entering the last SS contest, and getting really, really tired of saying my call sign over and over…  This device allows for remote triggering of the four memories in my Icom 756 Pro 3.  Triggering is accomplished by simply pressing a button on the iMate, which is labeled for which memory you wish to trigger.  The iMate does not allow for programming, only triggering the playback of a previously recorded message.  It also does not store the messages, you only get four messages, four for CW and four for voice.  The iMate inserts between your Microphone, and your radio, after any level conversion hardware for digital.  This allows for an easy install, without re-wiring your entire station audio chain.  The device is a small plastic box, with controls mounted on the top of it.  This allows for easy placement on your working surface.  Once installed, you just press a button leaving the Icom radio controls set as you normally would.  I leave my Band scope up at all times, and after the last SS, (first phone contest for me, I normally do RTTY and CW), I realized that I could not live without the band scope, (the 756 PRO 3 will not show the band scope if you are in memory playback mode without the iMate), hence the purchase of the iMate. 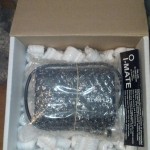 After a three day wait, the iMate arrived in a smallish box, well packed, and securely taped shut.  The iMate was wrapped in bubble wrap, and that was suspended in Styrofoam peanuts.  I ordered the iMate on line on a Sunday, and it arrived on a Tuesday, which means BetterRF sent it out almost instantly.  I got an email on Monday telling me it was shipped.  Any company that sends an email telling me something is shipped is OK in my book…  It lets me know that they care about customer satisfaction.  I had to dig the iMate out of the Styrofoam peanuts to get it on top for the photo on the left.  BetterRF had carefully submerged the iMate within the peanuts.  My guess is that unless the UPS truck ran it over, it would have survived a real pounding…  Kudos to BetterRF for a very good packing job.

I pressed the  memory 1 button, and nothing happened…  I pressed Memory 2 button and nothing happened…  I pressed Tune and got very low audio drive to the rig…  Uh Oh…  My first thought was what is wrong with my new iMate…  I dug the manual out of the packing plastic, and started to read…  Looking over the installation diagrams I had it connected correctly, so it must be the iMate…  At that point I started considering calling BetterRF support, fortunately for me I decided to actually read the manual from cover to cover prior to calling BetterRF.  I finally found two places which explained the failure modes I was getting.  I needed to tell the 756 PRO III that I had an external keypad.  That done, everything began working as I expected.  I press memory 1 and I get message 1 transmitted, and the rig keyed and unkeyed as I expected it to.  Next I hit the tune button again, same low audio…  Back to the manual, ahhh  Here it is, there is a level adjustment…  Adjusted that, and all is well.

How nice it is to have my “CQ Contest” voice memory available now, with the band scope showing…  Once set up, in order to play back a memory, all one has to do is to press the correct button.  With four memories, I don’t have to give my call over and over, I just press the little white button.  I can’t wait to try this on a CW contest!  The little red PTT button works, and the tune button works.  One feature of the tune, is it runs your amp at full power, but pulses it, that way the amp is not getting hammered during the tune phase.  It does take a bit of getting used to though.

Conclusion:
This is a very simple device to install and use, and it gives me back my band scope, which I really had no idea I used as much as I do, until I tried the voice memories of the 756 Pro III.  Once the iMate was installed, my rig is back the way I want it, and I get to use the memories without pressing the button on the front panel of the rig all day.  Pressing a button over and over all day and night, as in contest operation worries me with regards to button life.  I would MUCH RATHER break a button on the 90 dollar iMate, than on the 1K plus dollar 756 PRO III.  So the iMate protects the rig, gives me voice and CW memories, and allows the band-scope to be used.  All in all for the cost it is well worth it, and I would do it again…  Have fun contesting…
Addendum (12/05/12):
After a month of use, I can’t say enough about how handy this little device is…  I can no longer imagine not having it.
Addendum (09/14/2013):
It appears that the web site for BetterRF is no longer up, and I am seeing posts indicating that they are out of business.  QRZ also has a note on their site indicating the same.